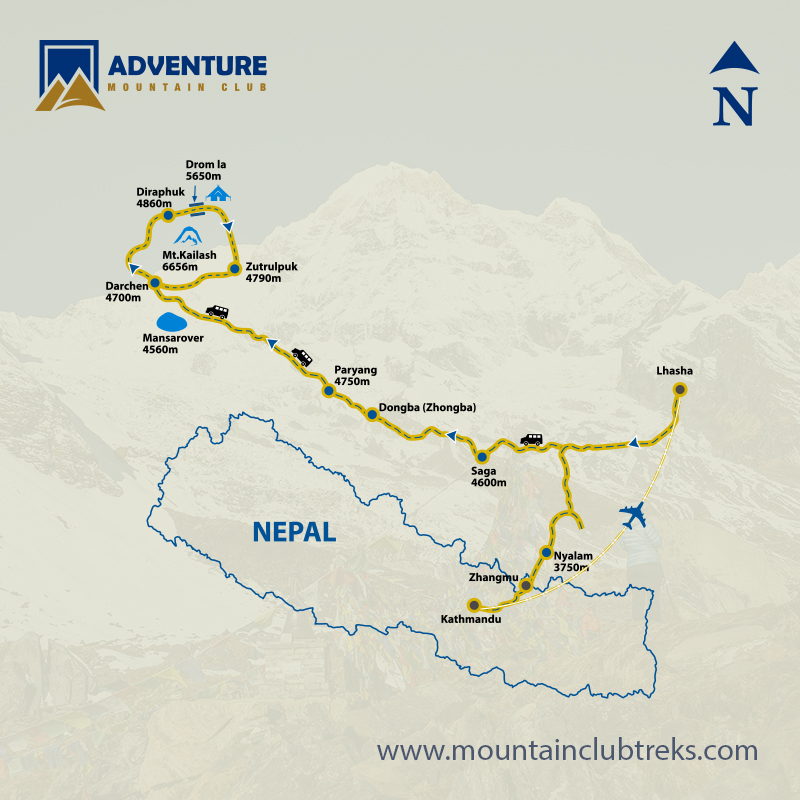 The most amazing Lhasa & Mt Kailash tour begins with a spectacular flight from Kathmandu to Lasha. The first 4 days Lhasa & Mt Kailash tour explores the important heritage sites of Tibet including, Potala Palace, Jokhang Temple, Sera Monastery and Barkhor street. It is very nice to acclimatize your body before driving to Everest Base Camp and Manasarovar Lake. Everest Base Camp tour presents the magnificent view of Tibetan Himalayas, Lakes, legendary monasteries and top of the world Everest. At the same time, your tour to Manasarovar investigates the holy lake of Manasarovar and holy mountain Mt. Kailash.

Hindu people also visit Manasarovar Lake and have a bath believing to across the pain and suffering after death. Not only Nepali but also most of the Indian Hindu take bath in the Lake of Manasarovar. The Holy Lake of Manasarovar is at 4590 meters above sea level. A large freshwater lake of Tibetan Plateau, with an area of 88 km. According to Hindu mythology, Lake Manasa Sarovar is a personification of cleanliness. And those people who drink water from the lake will go to the Abode of Lord Shiva after their death. He is believed to be cleansed of all his sins committed over even a hundred lifetimes. Also, people bring the water in the bottle for families and relativities.

Dominating the north of the Himalayan Barrier

with its spectacular view, the Mount Kailash (or Mt. Kailas) is equally the holiest pilgrimage site for Hindus, Buddhists, Jains, and Bön-Po. Tibetans regard this mountain as the manifestation of Mount Meru, “the navel of the earth”. It is also a belief that here founder of Bon religion, Tonpa Shenrab, has descended from heaven. Hindus as the abode of Lord Shiva, Buddhists as the abode of Samvara and Jains as a sacred site where their prophet, Rishaba attained spiritual enlightenment. With its four sheer walls, distinctive snow-capped peak, and valleys interspersed with brightly-clad Tibetan pilgrims, Mount Kailash or Kang Rimpoche (‘precious snow-peak’, as known by the Tibetans) is an awe-inspiring sight. Four great rivers of Asia: the Karnali, the Indus, the Sutlej and the Brahmaputra (Tsangpo) originate from here.

A three-day trek (Parikrama or Kora) around Mount Kailash over a 5610-meter Drolma La (pass), clockwise for Buddhists and Hindus, and anti-clockwise followers of the ancient Bon religion, it erase the sins of a lifetime. Then to complete the Kailash pilgrimage one should bath in the sacred Lake Manasarovar. It is stunningly set on the Tibetan plateau and the majestic Gurla Mandata separates. On the journey to Mt. Kailash across the windswept Tibetan plateau, you will see cliff-top monasteries, wild-looking but hardy and hospitable Tibetans, yak caravans journeying over snowy passes, and the great peaks of the Himalaya with a foreground of grazing herds, yak skin tents, and a glittering turquoise lake. Exploratory tours of significant towns of Tibet (i.e Lhasa, Gyantse, Shigatse) combined with three-day trekking around Mount Kailash, has become a very popular adventure activity in Tibet over the past few years.

Kathmandu is the historical and cultural heart of Nepal and has been a popular destination for tourists ever since Nepal opened its doors to visitors. The city presents a wonderful mix of Hinduism, Tibetan Buddhism and Western influence in the Valley. Patan and Bhaktapur, its two major neighboring cities bear immense historical, cultural and religious significance. There will be a full day guided tour to the famous and biggest Hindu shrine of Pashupatinath, the largest Buddhist stupa in Nepal Bouddhanath, Old Kathmanu city as well as Swyambhunath. We prepare for Chinese visa and all documents for Tibet tour.

We will fly from Kathmandu to Lasha. After reaching in Lasha Airport, depart to hotel and have a rest. We can walk around to enjoy the first glance of Tietan Platinum and Buddhist Cultural Heritage. We will sleep in the hotel.

Today, our guide will take us to visit world heritage and explains Tibetan history. In the morning we go to visit Potala Palace which is the famous Guru Dalai Lama’s winter residence. It will be impressive visit to Potala Palace of Tibet. In the afternoon, visit Jorhkang temple where thousands of pilgrimage give devotion. We also walk around Backhor Street of Tibet. We will sleep in the hotel.

Today we visit to most important Buddhist monasteries of Tibet. In the morning our guide helps us to visit biggest college of Tibetan Buddhism (Drak Yerp Hermitage) having big number of Tibetan Monks. This monastery was also the winter residence of Dalai Lama before the 5th Dalai Lama moved to Potala Palace. In the afternoon, we visit Sera and Gelugpa Monastery where Monks read holy books with praying Tibetan Buddhism. We will sleep in the hotel.

We drive to Sigatse from Lasha city with exploring traditional historical monuments of Tibet. We will see Yamdrotso Lake after we summit Kamba-La (4700m) with majestic view of Mount Nojin Kangtsang (7193m). Karola Glacier, snow capped mountain peaks, Pelkor Chode Monastery with Gyantse kumbum are the major destination of today’s trip. The multi stored Kumbum Stupa was crowned with golden dome and Umbrella. We will sleep in Sigatse hotel today.