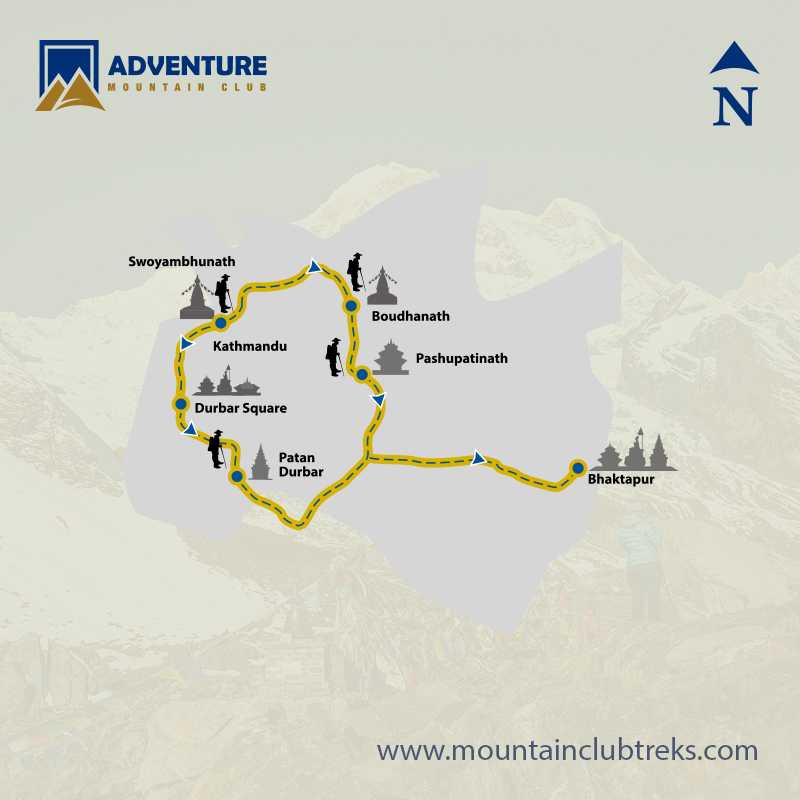 Kathmandu Day Tour includes all the main tourist attractions of Kathmandu valley. One can experience the realistic existence of Hindu and Buddhist culture associated with past and present. Kathmandu Day Tour also comprises historical and cultural monument, Nepalese art and architecture, unique old Newari houses, languages, living styles of the people and Hindu and Buddhist pilgrimages. Your day tour also consists of UNESCO World Heritage Sites with cultural tour guide. Our guide will brief you the Nepal information such as history, culture, geography, ethnicity, caste system, and many things associated with Nepal background. The trip will be unforgettable because of cultural as well as natural attractions of Kathmandu. Kathmandu Day tour will be best excursion to experience local cultural treasure and visualize picturesque high mountains.

During Kathmandu day tour, our guide will take you to show UNESCO heritage sites called Monkey Temple. The original name of this temple is Swyambhunath from where one can achieve the picturesque city of Kathmandu with Langtang Himalaya. The land which is self originated is called Swyambhu. Buddhist and Hindu people pay homage together in this temple. The legend of this temple goes back to 25oo year back, having big lake in Kathmandu where Manjushree cut the hill in southern part Of Kathmandu and take all water out and build small temple on the top of hill. The entire stupa, monasteries, ancient sculptures, monkey forest, chityas are the main attraction here.

Patan Durbar Square comprises the old newari houses, temples, chortens, and living primitive standards. Historicall Patan is known as Laitpur “the city of fine arts”. Patan is the residence of distinguish artists who have been performing their skills in wood, stone and metal. In 16th and 17th century, Patan was also the kingdom with a king to rule. Patan was the youngest Malla kingdom where Buddhist and Hindu monuments performance together.

Pashupatinath is a sacred Hindu pilgrimage literally means “the lord of animals”. The temple is located in the bank of Bagmati River which runs down to Gangas. Only Hindu people can visit inside temple to worship “Shivalinga” which symbolize the power of creativity. You will also get chance to see cremation which they burn in the fire. The holy men know as “Sadhus” will ask you to take picture with painted face, dreadlocked hair and ash applied body. Each year in February, Hindu people celebrate festival called Shivaratri also known as Hashish Festival. It is free to smoke hashish in the temple and Sadhus are allowed to appear in naked form.

There is opportunity of see living goddess in Kathmandu Durbar Square with many historical old temples and king palace. Kumari stands for virgin, pretty, beautiful girl symbolize the incarnation of goddess Taleju and Durga. Kumari represents the power, energy goddess, preserves country and whole culture. It will be fantastic to see kumari who comes in the window less than one minute. Kumari goes to public place once a year one time where thousands of people come in the road to pray Kumari. Kasthamandap temple, king palace and many more temples will be your attractive destination eventhough some are damage by Earthquake which are still under construction.

Bhaktapur is the 800 years old Malla kingdom of Nepal. It is also another opportunity to see the real image of old Newari town and its art and architecture. Nayat-pole Temple, Dattrataya Temple, Taleju Temple, 55 Windows, Historical Ponds, Primitive Newari Houses are the main attraction of this town.