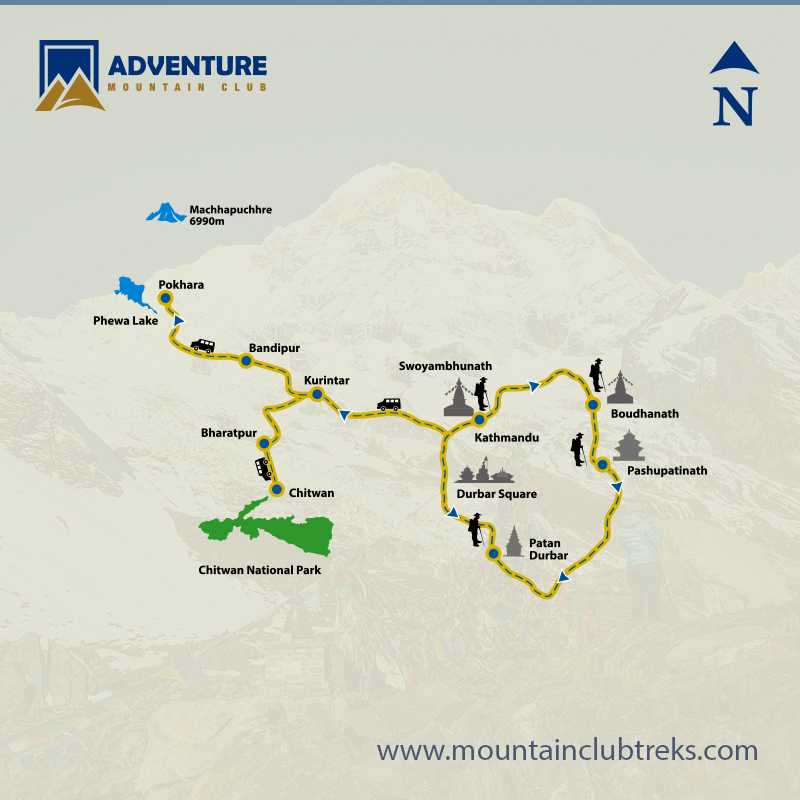 Kathmandu, Chitwan and Pokhara tour shows the incredible historical cultural sites, Jungle Safari activities, and stunning view of Annapurna Himalayan ranges. Kathmandu is beautifully crafted and made temples, stupas, and shrines in the lap of the mighty Himalayas. One can experience Hindu and Buddhist live culture, its existence with past historical monuments.

Chitwan National Park is best for Jungle Safari and wildlife activities that cover 932 sq km. Your tour comprise with Elephant Safari to see wild animals such as Rhinos, monkeys, Deers, Leopards, crocodile and many spices of birds. Chitwan National Park is haunting of more than 700 spices of wildlife, butterfly, moth and insect spices. This national park is the home to at least 43 species of mammals. The king of the jungle is “Bengal tiger”. Pokhara an enchanting city nestled in a tranquil rock valley at an altitude of 830m. The serenity of Phewa Lake, breathtaking glance of Machhapuchhre (6993m), sunrise view, old caves, and waterfalls are also the main attraction of Pokhara. Trekkers start and also end their trekking of Annapurna region in Pokhara. Kathmandu, Chitwan and Pokhara tour is one of the famous tour in Nepal.

You will have great opportunity to explore history, nature and cultural in this tour of Kathmandu Chitwan Pokahra. Let’s go with Adventure Mountain Club Treks & Expedition.

Arrival at Tribhuvan International Airport Kathmandu, Overnight in the Hotel

When you land in Tribhuvan International Airport Kathmandu, check your hand bag, go to immigration office, make visa for your trip and get your suitcase, where outside our represented member shows you the board of our Company and your Name, transfer to the hotel. Our director meets you in the hotel and discusses about your whole trip. In the evening you will participate to experience typical Nepali food with cultural dance show.

In the first day of your trip, our guide will take you to show UNESCO heritage sites of Kathmandu such as Monkey temple, Patan Durbar Square, Pashupatinath Temple and Bouddhanath. Monkey Temple, the original name of this temple is Swyambhunath from where one can achieve the picturesque city of Kathmandu with Langtang Mountain. The land which is self originated is Swyambhu- Deity of Hindu and Bhddhist followers. Buddhist and Hindu people pay homage together in this temple. The legend of this temple goes back to 25oo year back, having big lake in Kathmandu where Manjushree cut the hill in southern part Of Kathmandu and take all water out and build small temple on the top of hill. The entire stupa, monasteries, ancient sculptures, monkey forest, chityas are the main attraction here. Patan Durbar Square comprises the old newari houses, temples, chortens, and living primitive standards. Historicall Patan is known as Laitpur “the city of fine arts”. Patan is the residence of distinguish artists who have been performing their skills in wood, stone and metal. In 16th and 17th century, Patan was one kingdom where king used to rule only in Patan. Patan was the youngest Malla kingdom where Buddhist and Hindu monuments performance together.

Pashupatinath, a sacred hindu pilgrimage literally means “the lord of animals”. The temple is located in the bank of Bagmati River which runs down to Gangas. Only Hindu people can visit inside temple to worship “Shivaliga” which symbolize the power of creativity. You will also get chance to see cremation which they burn in the fire. The holy men know as “Sadhus” will ask you to take picture with painted face, dreadlocked hair and ash applied body. Each year in February, Hindu people celebrate festival called Shivaratri also known as Hashish Festival. It is free to smoke hashish in the temple and Sadhus are allowed to appear in naked form. You will continue to see Buddhist Stupa “Bouddhanath” the god of peace and wisdom. Bouddhanath stupa is considered as one of the largest stupa in the world build in 3rd century. Buddhist monks walk around stupa from clock wise by saying “OM MANE PAD ME HUM”. You will continue to walk around stupa with monks.

Kathmandu -Chitwan, Overnight in the Hotel

Drive to wildlife Chitwan National Park by leaving historical city Kathmandu, which lies in Southern Part of Nepal 160km far from Kathmandu. After check in the Hotel, you will go for short walk to Tharu Village, tribal people with local guide. There will be Tharu Cultural dance presentation.

This day you will have full day tour including Jungle Safari, Elephant Riding, Elephant bath, canoying, Bird watching. Your camera goes to capture wild animals such as Tigers, Rhinos, Deers, Beers, Crocodile and birds. In chitwan your breakfast, Lunch and Dinner is included.

Chitwan -Pokhara, Overnight in the Hotel

This day you will leave wildlife National Park and enters to natural mountain city Pokhara. It takes 4 hour to reach Pokhara from Chitwan by car. Boating in the Fewa Lake is another beautiful tour programme. after you check in the hotel. Your first glance goes to spectacular view of Machhapuchhre (6993m) that makes you awesome and overwhelming. In the evening, fresh walk to Lakeside to get good dinner in the typical restaurants.

Today, you will drive or fly back to Kathmandu from Pokhara and take a free time for preparation to return home

Our represented member of the company helps you for departure flight to your respective destination.