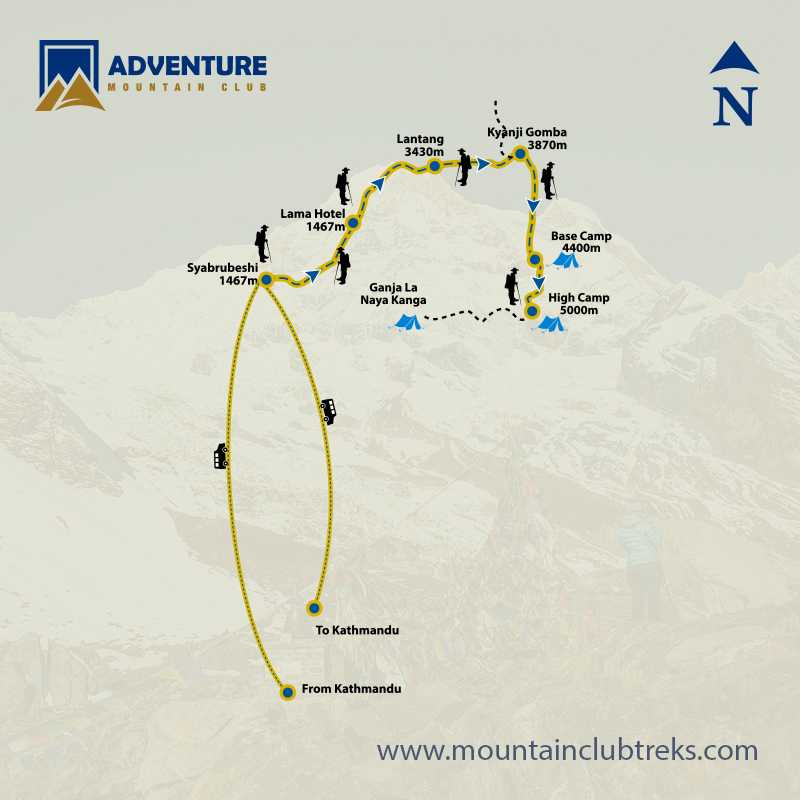 Naya Kanga Peak is also known as Ganja La Chuli is a popular trekking peak in Nepal. Ganja-La Chuli/Naya Kanga Peak Climbing lies in the Langtang region. Langtang is a popular destination for climbing snow peaks and spectacular panoramic views of mountains in Nepal and Tibet. Easy access to the region and availability of several snow peaks scattered around for acclimatization make this region an ideal destination for mountaineers. Besides that many small peaks in this region which require no previous climbing experience are suitable for even trekkers to have little taste of what’s like climbing in Nepal.

is also an attractive peak rising to the west of the Ganja La (5,122m). Ascending to Ganja La or the summit of Naya Kanga offers the spectacular panoramic views of mountains in Nepal and Tibet including Langshisa Ri (6,370m), Pemthang Ri (6,836m), Shisapangma (8,046m), Langtang Lirung (7,425m), Pemthang Kapro Ri (6,830m) and Langtang II (6,571m). The normal route of ascent to Naya Kanga is via the North-East Ridge over a line on ice and snow. We follow the route of Langtang trek to Kyangjin (3,749m) for the ascent of Naya Kanga. To the north above Kangjin, there are several hills that provide both the magnificent views and the acclimatization. Northeast of Kyangjin Ri (4,700m), there are two peaks; Yala Peak (5, 500m) and Tsergo Peak (5,749m) that provide good climbing for acclimatization. The normal route for climbing Naya Kanga peak is north-East Face & North Ridge.

Looking at a map, Langtang seems quite close to Kathmandu, but in reality you still have to endure a jarring 8hr ride in a wheezing bus to get to Dhunche. About 45 minutes out of Kathmandu, you pass through the town of Kakani where there are great views of the Mustang, a grouping of peaks only partially visible from Kathmandu. Trisuli, on the river of the same name, is a busy bazaar town, and is often called Trisuli Bazaar. The river, which flows southwest, is very popular with rafting companies and you may see a group getting ready to put in here. For many years, this was the start of the Langtang trek, but there is now a rough road to Dhunche that bypasses the old trail and cuts the number of days necessary for this trek. It is a rough road to Dhunche, and during the rainy season there are frequent landslides, which may keep the road closed until sometime in mid-October. For part of the way the road clings to the edge of a steep mountain. Dhunche (1970m) is an attractive village with large stone houses. Here, there is a police checkpost where you must show your trekking permit and pay the entrance fee, for the Langtang National Park, which you\'ll be trekking through. This is more or less the \"gateway\" to the essentially long, narrow valley running parallel to the Tibetan border, and hemmed in by high, snow-capped peaks. From our tents, there are excellent views of Gheng (6581m) and LangtangLirung (7246m) to the north and Ganesh (7460m) to the west.

Today\'s trail starts meandering through the cool deciduous forests of oak that cover the lower sections of the valley and climbs through massive stands of spruce, fir and blue pine. Towering walls close in and your paths will skirt precipitous drops, which fall into a silt-laden river below. It\'s a classic transition from temperate lowland forest to high-altitude Himalayan valley. Descend through the village of Syabru and continue down the ridge until you come to a trail to the east that drops sharply off the ridge and through a dense forest. Cross a bridge (1960m) over a tributary of the Langtang Khola and then climb for a short distance. The trail continues level for a ways before descending, still in forest, to the Langtang Khola. The trail follows the south bank of the river through a deep gorge with no views of the mountains, crossing another tributary in about an hour. In another hour from this tributary, cross yet another bridge (2050m) to the north bank of the Langtang Khola. The trail begins climbing up from the river at this point and in an hour, shortly after the trail levels off; you join the old Langtang trail (2380m) from Syarpagaon and Syabru besi. Another hour from this trail junction brings you to the Lama Hotel in the tiny village of Chongong (2400m). Like all of Langtang\'s guesthouses. At this point you start to become aware of the firm control the government exercises over the parks - with results that are often good, but sometimes questionable. On one hand, there are strict controls on tree-felling, and the park has remained mercifully free from the satellite dishes that dominate some over-trekked parts of Nepal.

A day further on the forest peters out and you start getting the first tantalizing glimpses of snow-capped peaks. From the Lama Hotel the trail climbs steadily to GhodaTabela with glimpses of Langtang Lirung (7246m) through the trees. At times the trail becomes very steep but only for short distances. Gradually the air becomes thinner and the climate colder. At GhodaTabela (3010m) the trail leaves the forest and a spectacular view of Langtang Lirung appears. GhodaTabela was once a Tibetan resettlement camp but is now n army post. There is a good lodge where we\'ll stop for lunch. Continue up the valley, leaving the forests behind, the trail ascends steadily up to Chamki near Langtang village, passing below a monastery about 30min beforehand. Langtang was an interesting Tibetan-style village with stone- walls enclosing houses and fields where you just might see your first yaks. In the massive earthquake of 2016, whole Langtang village was gone up because of avalanche where more than 3oo people died. Langtang was very beautiful village and it was the nice touristic destination before massive earthquake of Nepal. So there tea houses/lodges are under construction so today we live in small Chyamki village.

You may notice that the valley above this point is U-shaped, which indicates that the valley was carved by a glacier. Below Langtang, the valley has the characteristic V-shape of a river-carved valley. Leaving Chyamki and Langtang, you ascend gradually to a chorten (a small Tibetan Buddhist stupa) behind which is a very long mani wall. The trail passes two small villages and the village widens. You cross several streams and a moraine before arriving at Kyanjin Gompa (3800m). Between Langtang and Kyanjin Gompa, the views just get better and better where you\'ll see YansaTsenji (6580m) and Kimshun (6750m) to the north and the Langtang Himal to the northwest. Since you\'ll probably arrive before lunch, you\'ll have time to do some exploring in the afternoon, though you may be experiencing some discomfort from the altitude. Alternatively, take a good rest and allow your body to acclimatize with the high altitude as much as possible to be fully-prepared for more ascending during the next day.

A day hike farther up the valley past the airstrip will provide more spectacular views that include Langtang Lirung (7246m), Ganchenpo (6400m), LangshisaRi (6320m), DorjeLakpa (6700m), Lenpo Gang (7100m), and Urkinmang (6170m). Four walk to the east of KyanjinGompa from the village is 5000m TsergoRi. If you start early in the morning and are well-acclimatized, you should be able to climb this peak and return to Kyanjin Gompa in 1 long day. The reward for climbing to the prayer flags on its summit is a magnificent view of the 7246m Langtang Lirung, the mountain that dominates the valley. There are numerous alternatives side trips. The surrounding area, especially to the north, is vast and has many smaller, uninhabited valleys - ideal for high-altitude, backcountry trekking. Several of the more moderate local peaks are quite climbable and provide breathtaking panoramic views of mountains in Tibet, including the 8027m SisaaPangma. If you have the inclination and the right equipment provided by us, the upper Langtang Valley can also be used as a base for glacier exploration.

Kyanjin Gumpa to Ganja-La Base Camp

After descending for about twenty minutes you cross a suspension bridge over Langtang Khola and then the trail moves uphill all the way to Nyengang Kharka. On both sides of your path you find juniper shrubs. You can enjoy the views of Langtang Lirung and Langtang Lirung glacier.

The trail is steep ascent until you reach High Camp. You trek along the rocky and icy glacier. This day also you can enjoy the views of Langtang Lirung, Tserko ri, Ganchenpo peak, Kibgyu Ri, Yansi Tsenji peak and few others.

This is an acclimatization day so that you can make preparation for Naya Kang summit.

Today is our final destination where we put our footprint on the top of Naya Kang Peak. After successful climbing, trek back to Base Camp.

Base camp to Kyanjin Gompa

You trek downhill until you cross a suspension bridge over Langtang Khola. Now you ascend for about twenty minutes to reach Kyanjin Gompa

Since you\'ll be acclimatized and will be descending, you should be able to reach the Lama Hotel in a day\'s walk (approx. 6hrs) from KyanjinGompa.

Continue descend to Syabru Besi from Lama Hotel through the forest and bank of Langtang River. Today, your trekking path is easy because of downhill.

After breakfast, drive to Kathmandu from Syabru Besi.

Today is our rest or shopping day in Kathmandu.

Our represented member from Adventure Mountain Club Treks and Expedition helps you for your departure to respective destination at Tribhuvan International Airport Kathmandu Nepal.